One of the nice things about writing on an almost totally unknown and unread blog is that no one cares if I take an unusually long hiatus.

My last blog sat for a year, unattended, before I finally put it out of its misery and took it down.

The hiatus was caused by... well, I have no end of excuses. But there were a few good reasons. I redesigned my website, something long overdue and that took me down lots of dead ends. I wasted more time than was good for me trying to come to terms with Javascript and jQuery, before deciding to leave that to smarter folks who expect more from their browser experience.  Next step: Try to fix the margins so that it looks good on a tablet as well...

Another major cause was the looming deadline to submit my dissertation to the Juilliard Doctoral Committee. I got it in with 30 minutes to spare, on December 2. Much of the last few months of editing involved getting things to “flow”, as my advisor would put it. The language had to be fixed and compacted. Reading it now, it feels almost too compact, as if every sentence was trying to compress an entire chapter of my research into improvisation. My ideal would be a kind of do-it-yourself guide to free improvisation, touting the benefits (musical, creative, spiritual, health, whatever) of group improvisation for classical musicians.

I don't like brevity for its own sake. I bristled a little when I had to rewrite my sentences to make them a few words shorter, or I had to use circumlocutions to avoid repeating a single word too many times. It definitely made things more... efficient. But is efficiency really the end-all of writing? Writers like Malcolm Gladwell, or Steven D. Levitt of Freakonomics, manage to make their arguments simple and cogent, but they don't spare words. Instead they find a lot of different ways to get to the same point, emphasizing it through varied repetition. That's what I'd like to be able to do. Unfortunately, my repetitions, read back with the benefit of a few months' hindsight, merely sound repetitive. So they had to go.

I'll try to keep a reasonable schedule of updates here in the future. After all, I do enjoy blogging, even if it is mostly for my own edification.

Posted by Edward Neeman at 6:36 PM No comments: 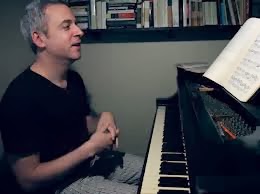 I'm trying to think who I've heard play Mozart piano concerti recently. There was Inon Barnatan last winter playing the D minor concerto with the Cincinnati Symphony. And my friend Mikael Darmanie playing the G major concerto at CCM. And for some reason a performance of the F major concerto in New York with Mitsuko Uchida sticks in my brain, not because I particularly liked it—Uchida is one of my favorites but I'll stick with her Schoenberg any day—but because of the way she crouched in the audience during the dress rehearsal to listen to the opening tutti, leaping on stage before her entrance. Finger fanatics, all of them. Every note like a pearl, elegant phrasing, runs and lines clear as a bell. I would have thought it takes a certain type of pianist to really shine in a Mozart concerto, especially in a live performance.

Which is why I was taken aback by Jeremy Denk's performance of the Concerto No. 25 in C major with the Cincinnati Symphony tonight. By any measure it was a great performance, really engaging and imaginative. But his fingers were a bit... mushy?

Not bad mushy, I would hasten to add. More a kind of endearing mushy, like a cuddly teddy bear or a melting ice cream scoop on a hot pie. There were a few missing teeth in the first movement runs, but Denk rounded them off so endearingly that it was like a six-year-old's impish smile. He had a strange habit of rushing phrase endings instead of tapering them elegantly as we've come to expect in Mozart. And the loopy rubato he used in some of his solos was on the point of caricature. But in the end it was all so cheeky and lovable that it was impossible not to be completely swept up by his performance, quirky body movements and all. I'm a big fan of his ornamentation, which is almost laugh-at-loud funny at times. I got so used to all his added embellishments in the first two movements that I lost track of which runs were Mozart's and which runs were Denk's in the final rondo. I had to check the score when I got home. His cadenza was as cheeky as the rest of his interpretation, with all kinds of crazy modulations. Personally, I might have preferred a more substantial one.

In fairness, the third movement runs were much less mushy. And I don't think anyone has ever done the piano entry in the first movement better.

The concerto was stuck between two works by Ralph Vaughan Williams: the Fantasia on a Theme by Thomas Tallis and the London Symphony. Both were powerfully conducted by Robert Spano, who was meticulously attentive to Vaughan Williams' orchestral coloring. I had a more positive impression of the Fantasia, a brooding and beautifully textured work. The London Symphony had too much symphonic padding—meandering sequences and unnecessary repetition—for my taste, but that's an opinion I'll probably have to revise when I know the work better.

I took advantage of the intermission to scoot from my usual place in the orchestra to the nosebleed gallery seats in Music Hall. That was my first time up there, and the acoustic was noticeably better. As I had been told by those who know. The brass section in particular was much clearer and brighter, and the woodwind sound also gained in richness and warmth. The string section sounded kind of lifeless, however. Their smooth, lithe tone as heard from the orchestra section sounded thin and under-balanced up top.
Posted by Edward Neeman at 9:31 PM No comments: