Amid the cobwebs of almost-forgotten piano history lies the strange story of the quarter-tone piano.

A typical piano is tuned in semitones, with 12 equally spaced notes per octave. (Also known as 12-EDO, for 12 Equal Divisions of the Octave.)


But where can all those extra notes fit? A quarter-tone piano needs twice as many keys as a conventional piano. The intrepid August Förster piano manufacturing company solved this problem by stacking two piano mechanisms on top of one another, with the upper one tuned up a quarter tone. 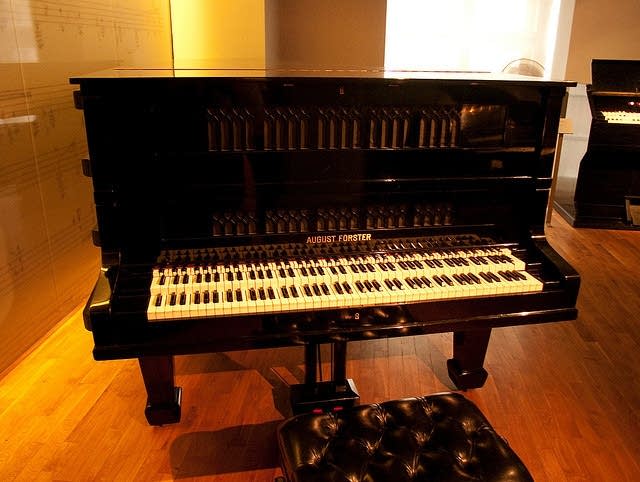 This beast of a piano was constructed in 1923 on the initiative of Alois Hába, one of the early pioneers of quarter-tone composition. It was followed in 1928 by an upright version for Ivan Wyschnegradsky, a Russian émigré in Paris who devoted himself to becoming the "microtonal Scriabin".

Meanwhile, the quarter-tone bug had spread across the Atlantic. At the instigation of Hans Barth, an experimental pianist and composer, Charles Ives composed his Three Quarter-Tone Pieces in 1923–24 and contributed funds to commission George Weitz of Chickering Pianos to develop an quarter-tone piano. Even though the premiere performance of Ives's Pieces used two pianos (one was tuned a quarter tone up) and two pianists (Hans Barth and Sigmund Klein), Ives originally intended the third piece, a Chorale, to be played by one pianist on a two-manual quarter-tone piano.

Alois Hába, Ivan Wyschnegradsky, and Charles Ives were the vanguard of quarter-tone piano composition, writing ground-breaking works from the 1920s on. But after the initial flurry of mechanical innovation, piano makers abandoned the idea of a single instrument that could play in quarter tones. Those early instruments, once so full of promise, now languish as museum pieces.

But two-piano writing, with two pianists, is really a different genre to solo writing. Even though many ambitious pianists have played Wyschnegradsky's music on two pianos, it's extremely difficult to recreate the feeling of the piano solo using two instruments. Can you imagine playing the melody line of a Chopin Nocturne on two pianos, alternating back and forth every few notes? That's what it feels like!

I've tossed around the idea of playing Wyschnegradsky's 24 Preludes, Op. 22 as a solo piano piece for years, but I never could quite figure out how to make it work. And then I stumbled across Aron Kallay's pathbreaking recording Beyond 12, and the world hasn't been the same since! Aron Kallay has made a major project of commissioning works for virtually re-tuned piano, which he performs using a MIDI keyboard and Pianoteq software. Composers can re-tune any note to literally any pitch they can imagine. After all, a MIDI keyboard is really nothing more than a controller with 88 pressure-sensitive keys. There's no reason that middle C on the keyboard shouldn't be able to sound at a G sharp... or that two seconds later, by pressing a pedal you can change that same key to sound at a D half-flat!

I play the Wyschnegradsky Preludes on a MIDI keyboard hooked up to my laptop, where I have two virtual Pianoteq pianos running with one tuned a quarter-tone flat. My keyboard playing comes in on MIDI channel 1, and each note is then rerouted (via Pd-extended) to one of the two pianos on channels 2 and 3. 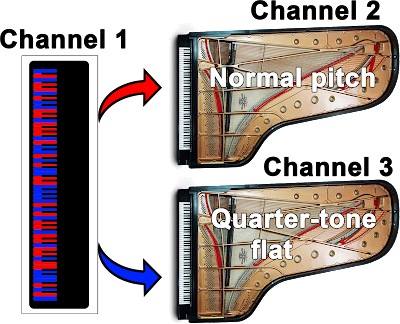 Of course, my keyboard can control only half the notes on the virtual pianos at any one time. I'll map certain keys to certain pitches for one section of the piece, and then I'll need to change to a different key mapping for a different section. I might have to change mappings several times over the course of a prelude, depending on how complex it is. For example, the first prelude is quite simple and has only three different mappings; the second prelude is full of rich chordal writing and needs 15 mappings! To change between mappings (and to control the pedals), I use a SoftStep foot controller as follows: 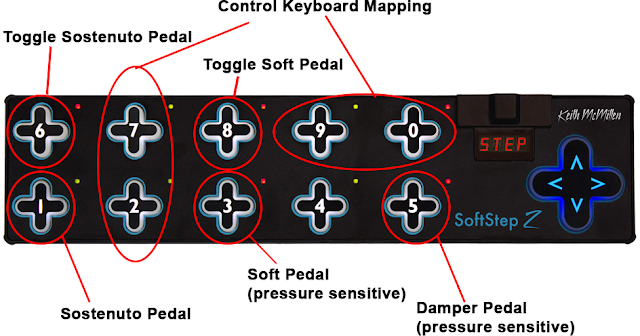 So far, these Wyschnegradsky Preludes have been a revelation! I'm working my way through the set, and have recorded the first two here:
The first prelude is little more than a whimsical introduction, but the second prelude is already a masterpiece, with drooping chromatic chords that remind me of Rachmaninoff.