In the several hundred years that musicians have been working in twelve-note equal temperament, we've barely scratched the surface of what's possible. Moving up to 24-note equal temperament doubles the notes and increases the range of potential tunes exponentially. A twelve-note scale has has 12x12x12 = 1728 melodies with four notes; a 24-note scale gives us 13,824 potential melodies!

That level of freedom can be exhilarating, or paralyzing. Many composers working in quarter tones have treated the quarter tone scale more or less like two normal chromatic scales that are out of tune with each other. That's a good way to start, but there's much more to quarter tones than that.

Ivan Wyschnegradsky devoted his life to studying quarter tones and other microtonal divisions of the octave, and it shows! He slides through the quarter tone scale with ease, inventing rich post-Romantic melodies that drip with emotion and sensuality. To an uninitiated listener, the quarter tones might be jarring at first, but I find that the initial discomfort evaporates quickly as I'm drawn into his inner sound world.

Even though Wyschnegradsky's scale sounds a lot like a normal chromatic scale, the little differences count for a lot. There are no major or minor chords in his scale! That fact alone forced him to think outside the box when searching for harmonies. Also, perfect fifths are scarce (only three exist). The most common intervals are the major fourth (a perfect fourth plus a quarter tone) and the minor fifth (a perfect fifth minus a quarter tone). These intervals occur naturally in the overtone series, just like our "normal" consonances of thirds and fifths. They closely approximate intervals around the 11th harmonic (11/8 and 16/11 respectively). 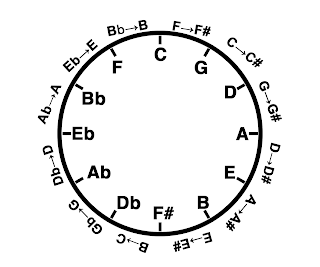 with a circle of major fourths! 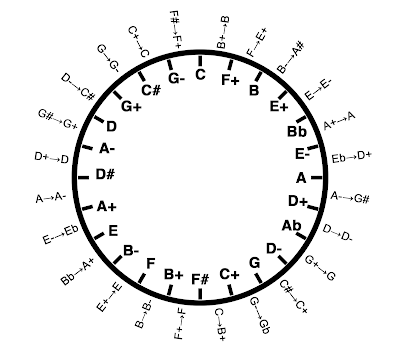 Just like in the circle of fifths, the circle of major fourths orders the keys so that moving between adjacent keys will change only one pitch in the scale (shown outside the circle).

When Wyschnegradsky wrote his 24 Preludes, Op. 22, he must have had Chopin and Scriabin in the back of his mind. Both Chopin (Op. 28) and Scriabin (Op. 11) wrote masterful sets of 24 preludes in all major and minor keys, going around the circle of fifths. Wyschnegradsky's preludes use his diatonic chromatic scale in all 24 quarter-tone keys, going around the circle of major fourths. All of his preludes have a clear tonal center, making it easy to hear that the first prelude is in C, the second is in F half-sharp, the third is in B, and so on.

Wyschnegradsky originally wrote these Preludes in 1934 and revised them in 1960. In the introduction to the score, he tells us that he started by restricting himself to using only the pitches in his 13-tone scale. In the revision, he allowed himself to play more freely with hyper-chromaticism, using all 24 pitches per octave.

No doubt his revisions were quite substantial! Some of the best moments in his Preludes are when he takes advantage of the poignant beauty that quarter tones can bring to even simple melodic gestures. One of my favorites is at the climax of the second prelude in F half-sharp. The drooping chords and hyper-chromatic voice leading build up so superbly, thrusting the music to a dramatic peak.

The third prelude in B returns to more "diatonic" sound, even though there is some of Wyschnegradsky's ear-titillating voice leading lurking in the left hand. It reminds me of Prokofiev's Visions Fugitives—a deceptively simple set of miniatures that belies the sublime artistry behind the surface. I love the shimmering trills that slowly descend across the keyboard, bringing the music to a questioning standstill.

With its Bartókian rhythms and driving intensity, the 40 seconds of the fourth prelude in E half-sharp are among the most crowd-pleasing of the set. Echoes of Bartók also come through with the relentless insistence on a descending modal scale, which forms the subject of a rapid-fire canon at the end.

Here are the first four preludes in their entirety:

Happy quarter-toning!
Posted by Edward Neeman at 6:55 AM No comments: