This post expands on many of the points covered in my video, "An Introduction to Double Pedaling."

Over the past two months, I have been developing “double pedaling,” a pedaling technique that allows the damper and sostenuto pedals to be used together in new ways. The sostenuto pedal, patented by Albert Steinway in 1874, remains little more than a curiosity among today’s pianists—even many experienced pianists have only a hazy idea of the potential applications of this pedal. Double pedaling greatly increases the possibilities of the sostenuto pedal, giving pianists unprecedented control over the resonance of their instrument. The pedal mechanism on the modern piano has a crucial flaw that prevents or complicates double pedaling in all but the most trivial instances. Fortunately, this flaw is easily fixed with a slight modification. 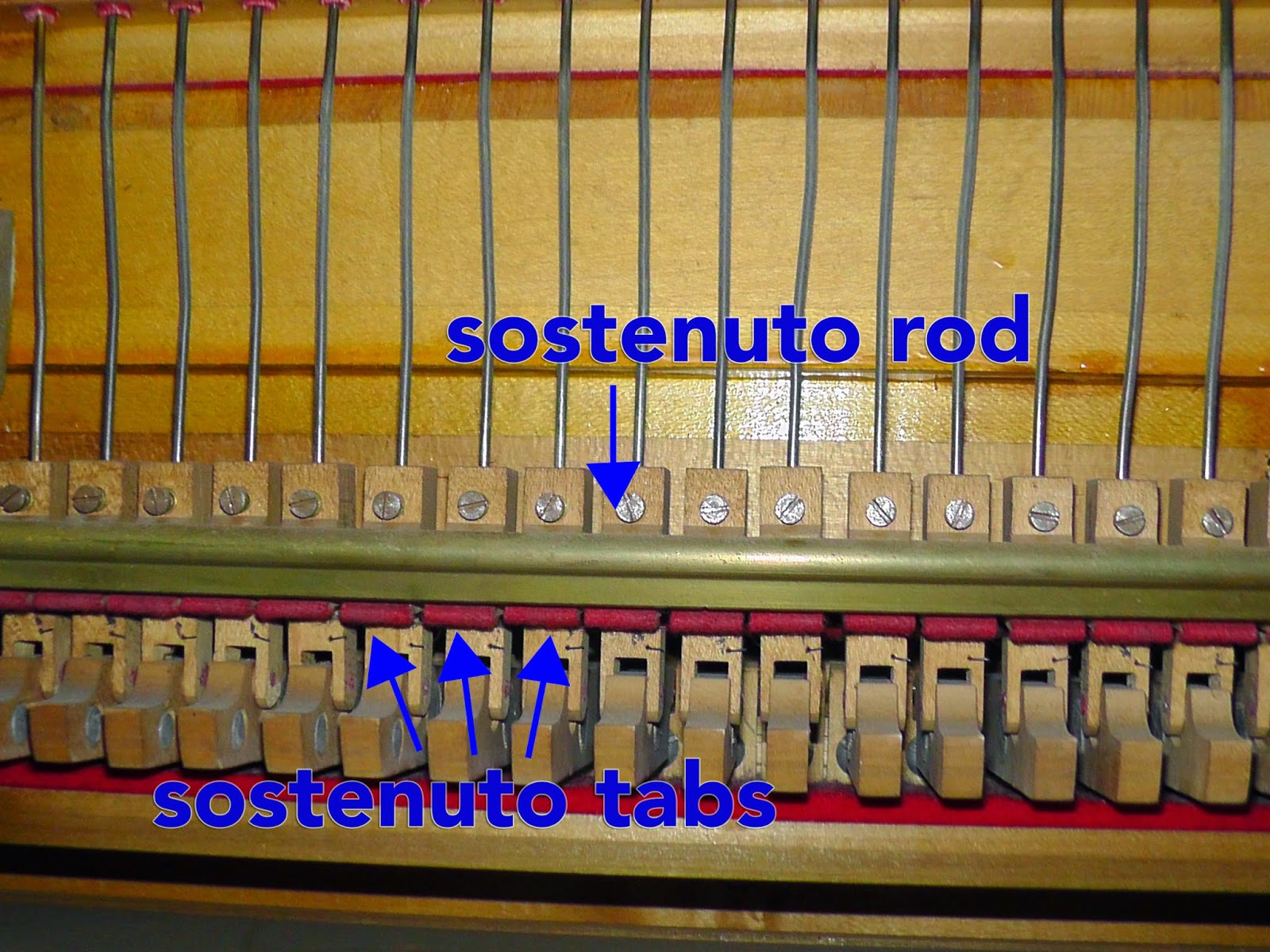 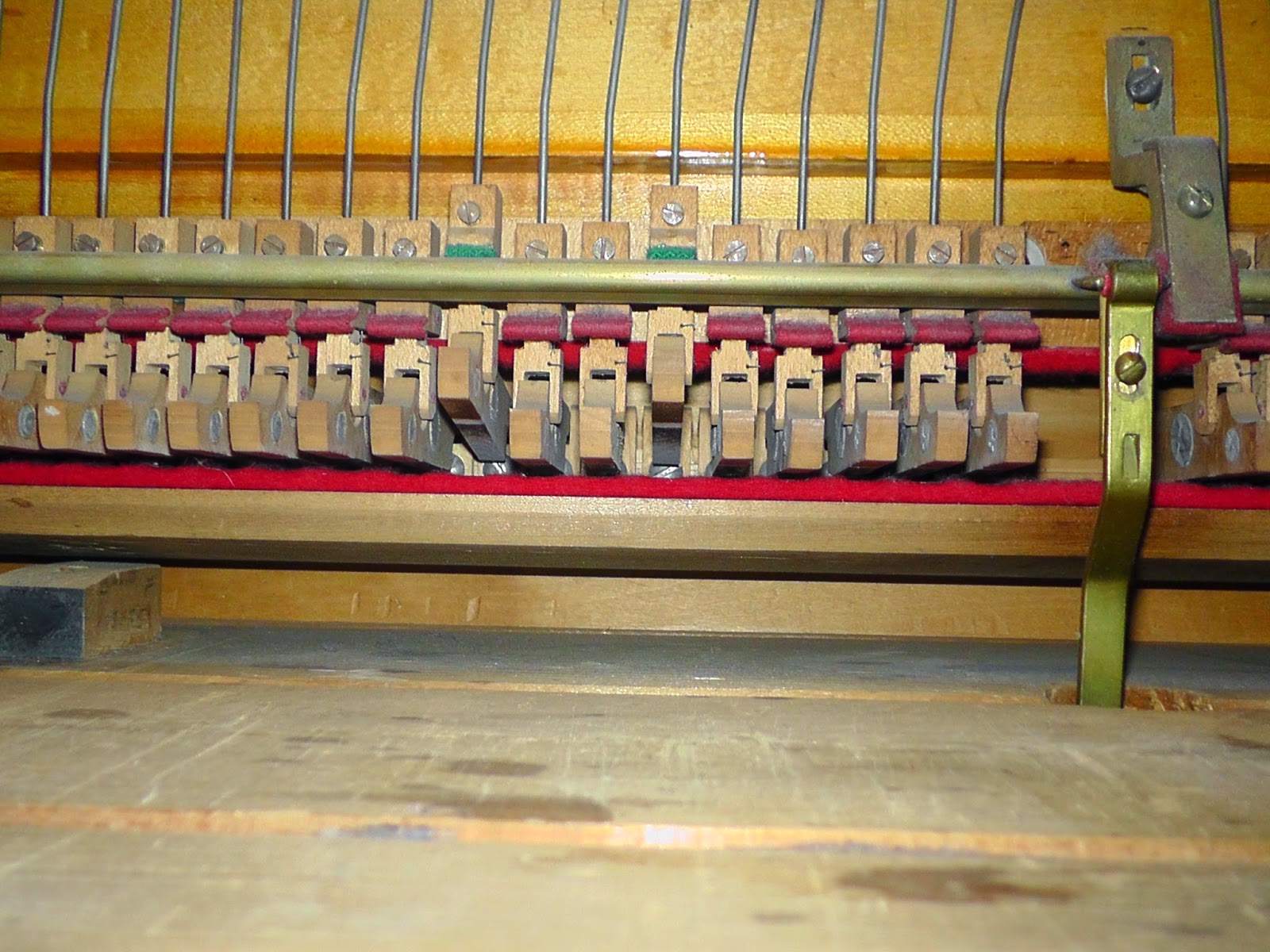 The picture above was taken with the sostenuto pedal depressed. The sostenuto rod has moved into position and has caught two sostenuto tabs, preventing the corresponding dampers from descending. 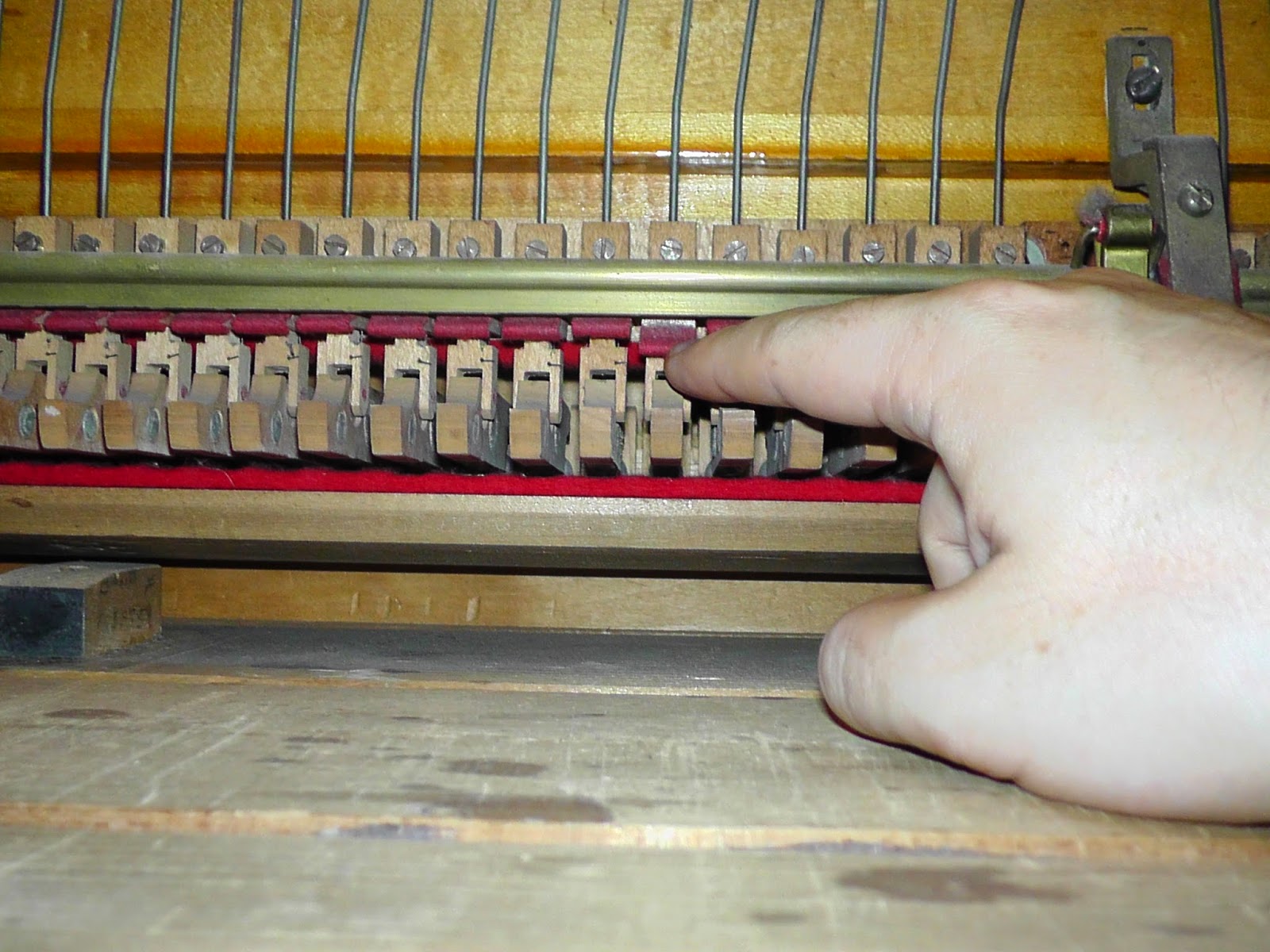 The Problem with the Sostenuto Pedal

The problem boils down to the fact that playing notes on the keyboard and pressing the damper pedal are equivalent as far as the damper action is concerned. In both cases, the dampers are raised in the same way, to the same height. The key to solving our double pedaling problem is to restrict the damper pedal so that it raises the dampers to a slightly lower level.

Experienced pianists know that pedaling is not really a binary thing. There’s the “black and white” of pedal up and pedal down, but there’s also an infinity of grays in between. This “half-pedal” zone can be tested by depressing the pedal very slowly and continuously testing the piano’s resonance. Half-pedal is a deceptive term, as it’s actually much closer to the “up” pedal position. At the position we call “half-pedal” (or quarter-pedal, or three quarters-pedal) the pedal is barely depressed, and the dampers are barely raised off the strings, muting them to some degree. Once the pedal has been depressed further, to about half or three quarters of the way down, the dampers are already fully off the strings and the piano sounds exactly like it does at full pedal. A fully-depressed pedal lifts the dampers an extra few millimeters, but doesn’t actually change the sound of the instrument. However, these millimeters are crucial, because the damper needs to be lifted all the way in order to be caught be the sostenuto pedal.

On most pianos, restricting the damper pedal is a simple operation that only takes a few minutes. There is usually a screw that is attached to the bottom of the body of the piano, above the damper pedal rod. Adjusting the screw is one solution (see the picture below). 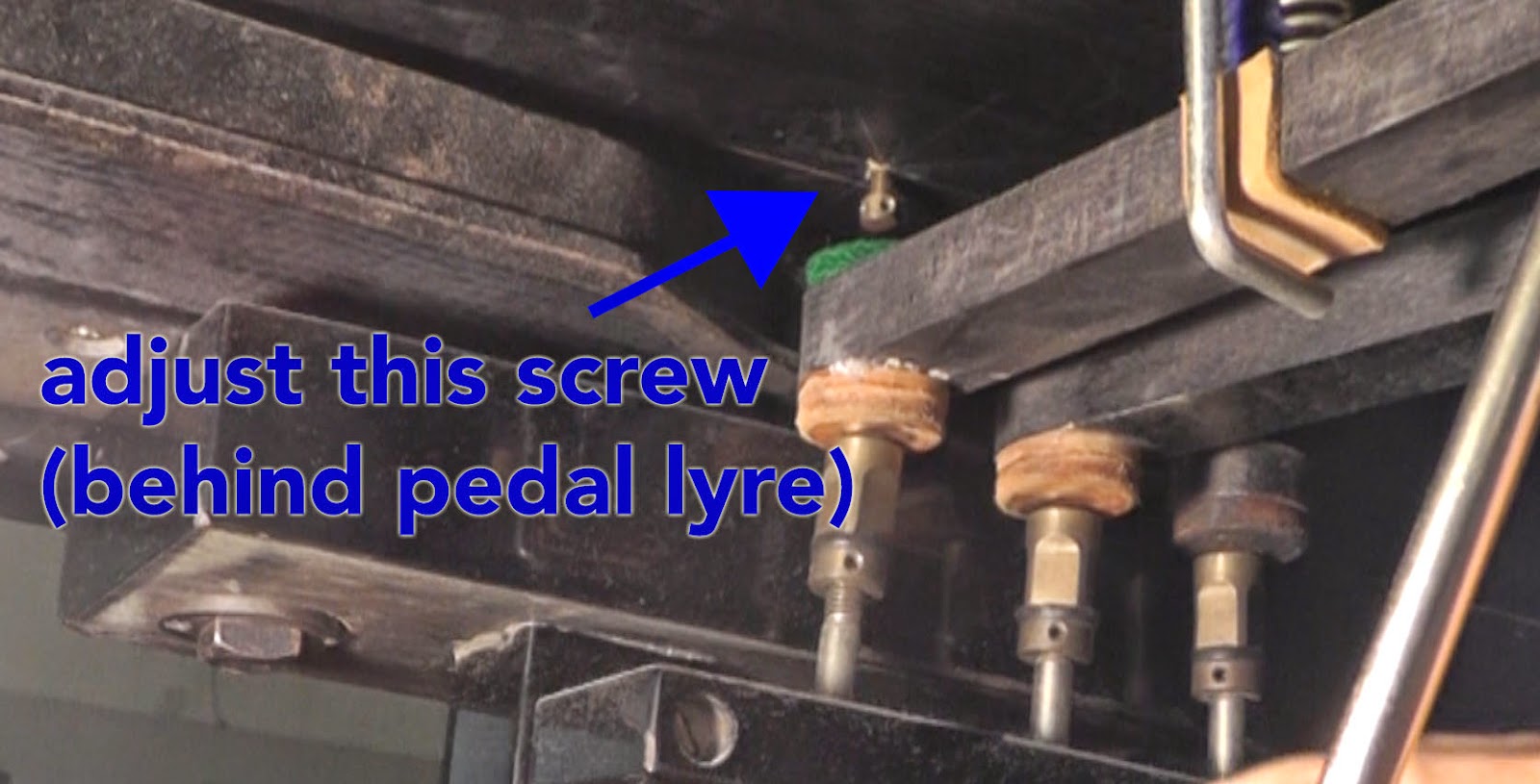 For a quick fix, or for pianos without an adjustable screw, there are various points in the pedal action where a barrier can be added to restrict the pedal motion. In the picture below, I added a folded piece of paper at the top of the pedal lyre. 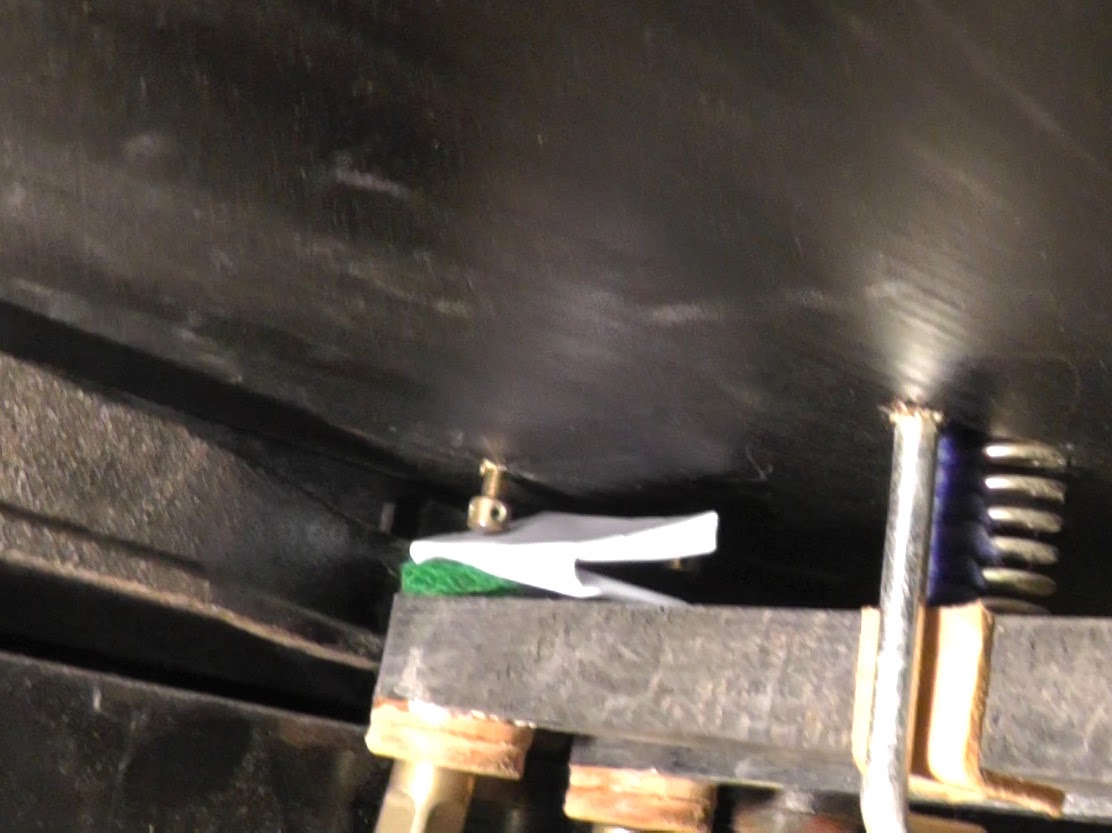 Restricting the damper pedal should allow double pedaling on any well-regulated instrument. Unfortunately, many instruments, even carefully maintained concert instruments, have issues with the sostenuto mechanism that are ignored because the sostenuto pedal is so rarely used. The adjustments suggested below can be attempted if restricting the damper pedal doesn’t produce the desired results, and should only be carried out by a trained piano technician.

The most common problem is that the sostenuto rod is not in the correct position and catches dampers that are barely raised. The diagram below shows how a faulty sostenuto mechanism can cause instruments to have no sweet spot at all. 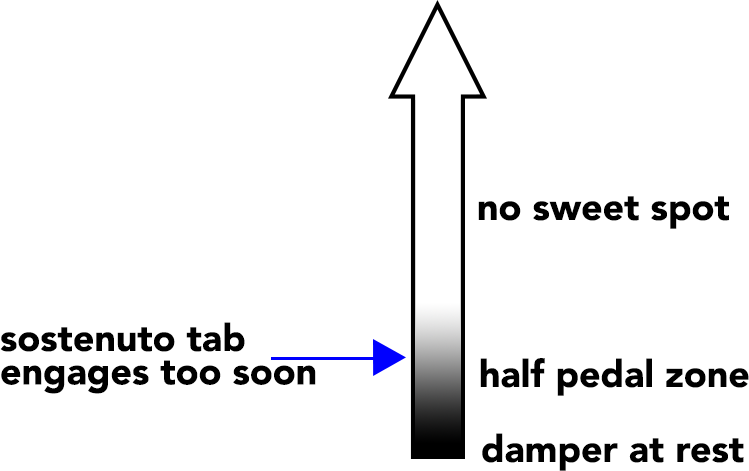 This can be solved by adjusting the sostenuto rod so that it catches the tabs in a higher position.

Sometimes the sostenuto pedal is not consistent, catching some notes but not others. This happens when the dampers are lifted unevenly. Regulating the dampers is a major operation that can take several hours. Depending on how severity of the problem, adjusting the sostenuto rod instead may be a more cost-effective solution. For the purposes of double pedaling, it’s advantageous to have the dampers lift further off the string, which increases the size of the sweet spot. However, too much lift can affect their ability to dampen the strings promptly on release of a key, since only the force of gravity returns the dampers to the rest position!

Another common problem occurs when notes are caught on the sostenuto pedal after the pedal is depressed. Sometimes the hinge on the sostenuto tab does not work correctly, so that the tab “jumps” over the engaged sostenuto bar instead of flexing down. This may require adjusting or replacing the faulty tabs.

In joint pedaling, the sostenuto pedal catches part of a larger sonority (usually including a bass note). The damper pedal is then used normally, but with the advantage that the pedal can be changed without losing the sonority. Most double pedaling applications in the standard repertoire fall under this category. 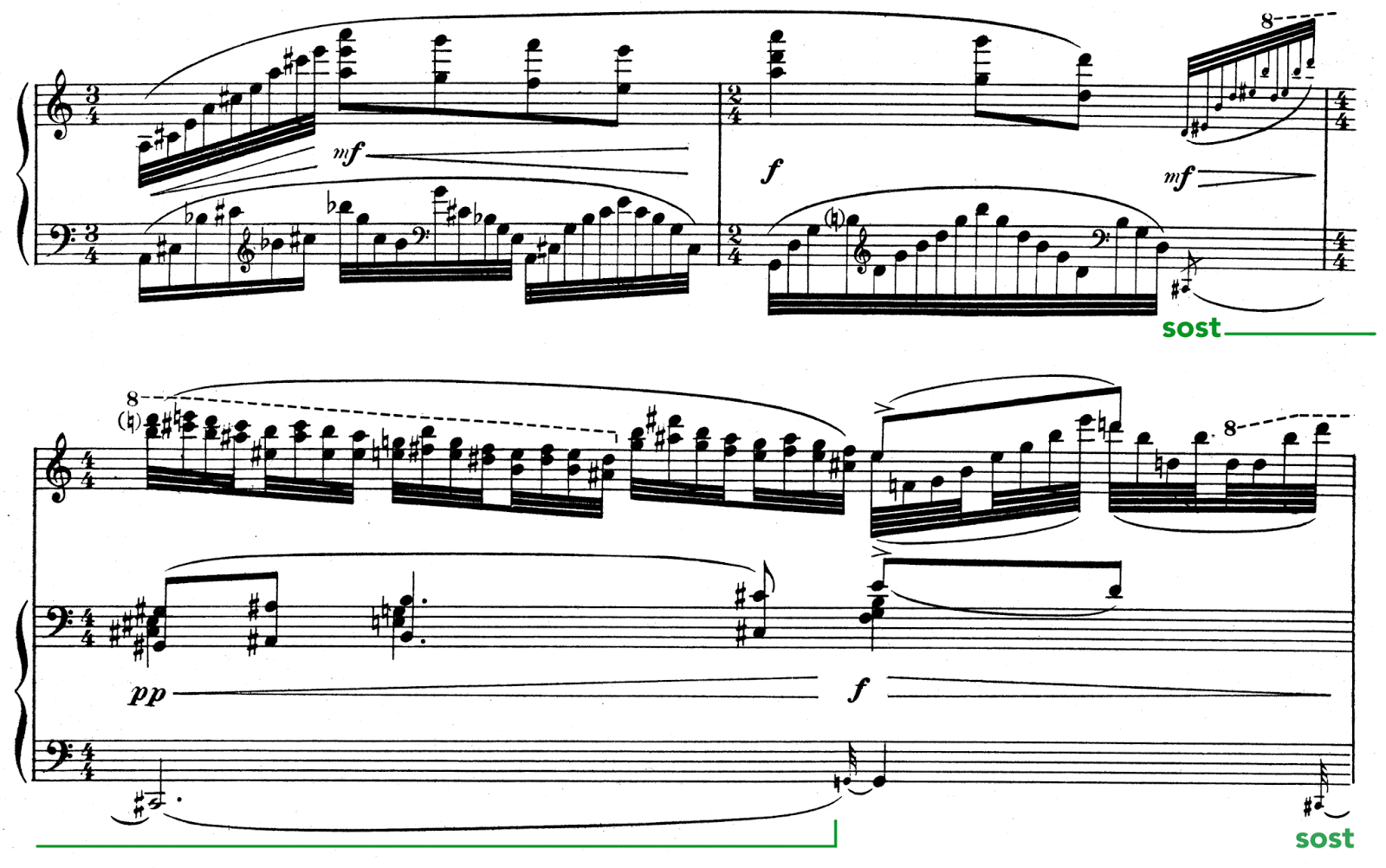 In the above passage from “Ondine” from Gaspard de la nuit by Ravel, it’s impossible to achieve a legato bass line as marked without double pedaling. Holding the C sharp with the damper pedal blurs the change of harmony on the second beat. By catching the C sharp with the sostenuto pedal, the damper pedal can be changed on the second beat without losing the bass.

This would normally require the pianist to keep the damper pedal raised while the sostenuto pedal is depressed, creating a gap in the sonority that undermines the sensual sweep of the right hand arpeggio. Restricting the damper pedal solves this problem!

Do you have small hands but big ideas? Pianists with smaller hands often have to break chords or release notes early, and are left with the dilemma of either losing the full sonority or muddying the pedal. By catching some notes with the sostenuto pedal immediately before a damper pedal change, it’s possible to overcome this disadvantage. Here’s an illustrative passage from the Piano Concerto No. 2, Op. 44 by Tchaikovsky: 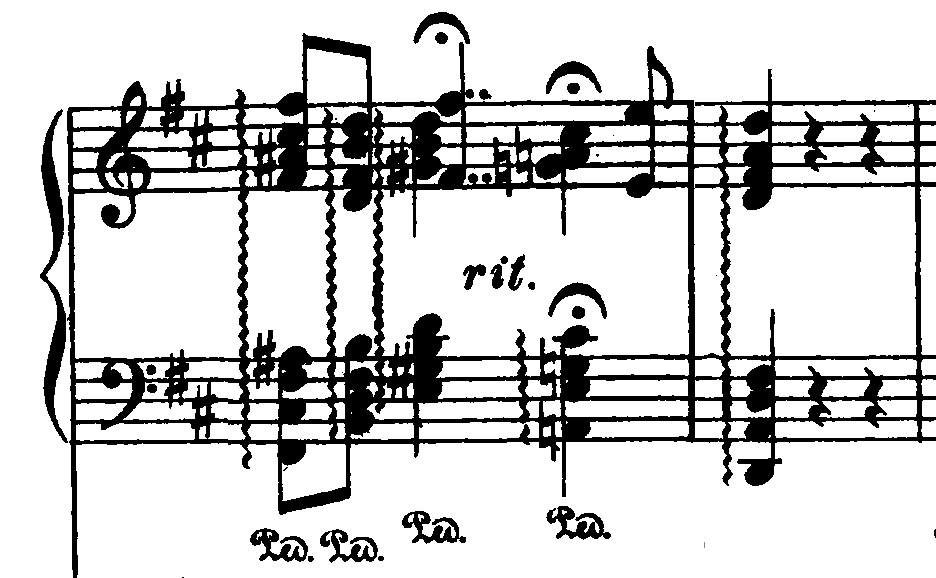 My left hand isn’t big enough to hold the bass D in the final rolled chord. That means that I need to change my pedal early in the roll (before the F sharp) to catch the bass D.

This solution is not ideal, since it makes it impossible to preserve a legato connection between the melody D in the right hand and the preceding E. A better solution is to catch the bass D with the sostenuto pedal, allowing me to change the damper pedal at the melody note without losing the bass.

It is important to release the E octave in the right hand (shown in the full except above) before beginning the roll; otherwise it will be caught on the sostenuto pedal and will blur the D major chord. The E will still be held on the damper pedal.

3. Overlapping Technique
Overlapping the damper and sostenuto pedal can produce all kinds of highly complex sonorities. The current piano repertoire doesn’t offer too many opportunities for interesting overlapping effects. This is an area that I hope will be explored soon by budding composers.

Here’s one example of overlapping technique, from the Piano Concerto No. 3, Op. 30 by Rachmaninoff. This passage alternates between two chordal melodies moving in different directions. While Rachmaninoff doesn’t indicate it, you can get an interesting effect by sustaining each melody while the other melody is active, for a true contrapuntal texture.

Here is the conventional pedaling approach:

Most recordings use this pedaling, or something similar. This pedaling sustains both melodies equally. However, you can still hear an eighth-note gap in one of the melodies at each pedal change (shown with big red rests):

Theoretically, double pedaling lets you play both melodies legato, without any gaps. On each beat of each measure, first change the damper pedal and then change the sostenuto pedal:

4. The Partial Sostenuto
Double pedaling enables catching part of a chord on the sostenuto pedal. That’s impossible with conventional pedaling, at least without releasing the extra notes. The “partial sostenuto” technique is useful in this passage from the Etude-tableau Op. 39, No. 7 by Rachmaninoff:

I have only begun experimenting with double pedaling technique over the course of the past few months, and I am already convinced that it is a powerful tool that has wide-ranging potential to enhance the coloristic and expressive capabilities of the modern instrument, with numerous possible applications in the standard piano repertoire. Modifying the pedal mechanism to allow double pedaling is a simple operation that can be achieved without any additional piano parts—only minor adjustments are necessary.

My goals with my double pedaling project are as follows:

1) To increase awareness of the sostenuto pedal’s function and its applications, and to develop and spread the practice of double pedaling.

2) To make a working sostenuto pedal a standard part of every instrument. Many entry-level grand pianos still do not have sostenuto pedals, and it is rare to encounter an upright piano with a sostenuto pedal (Steinway uprights, select Bösendorfers and the Yamaha YUS series are the exceptions). Of course, having a sostenuto pedal on a piano does not mean that it will actual work, as keeping it regulated is frequently seen as optional!

3) To encourage piano makers to modify their pedal mechanisms in house, so that double pedaling works correctly on new pianos without any further modifications.

I’m optimistic that I’ll see some real progress in these areas in the near future. Unfortunately, I don’t anticipate it will be a smooth road. The current environment in the piano world is very hostile to any innovation in piano design. So I’m asking for your participation! I would love to hear any feedback on double pedaling, or any new pedaling ideas that you might have. Also, please share this article and my video on double pedaling, which is available here: http://youtu.be/AWEFgQyCRok